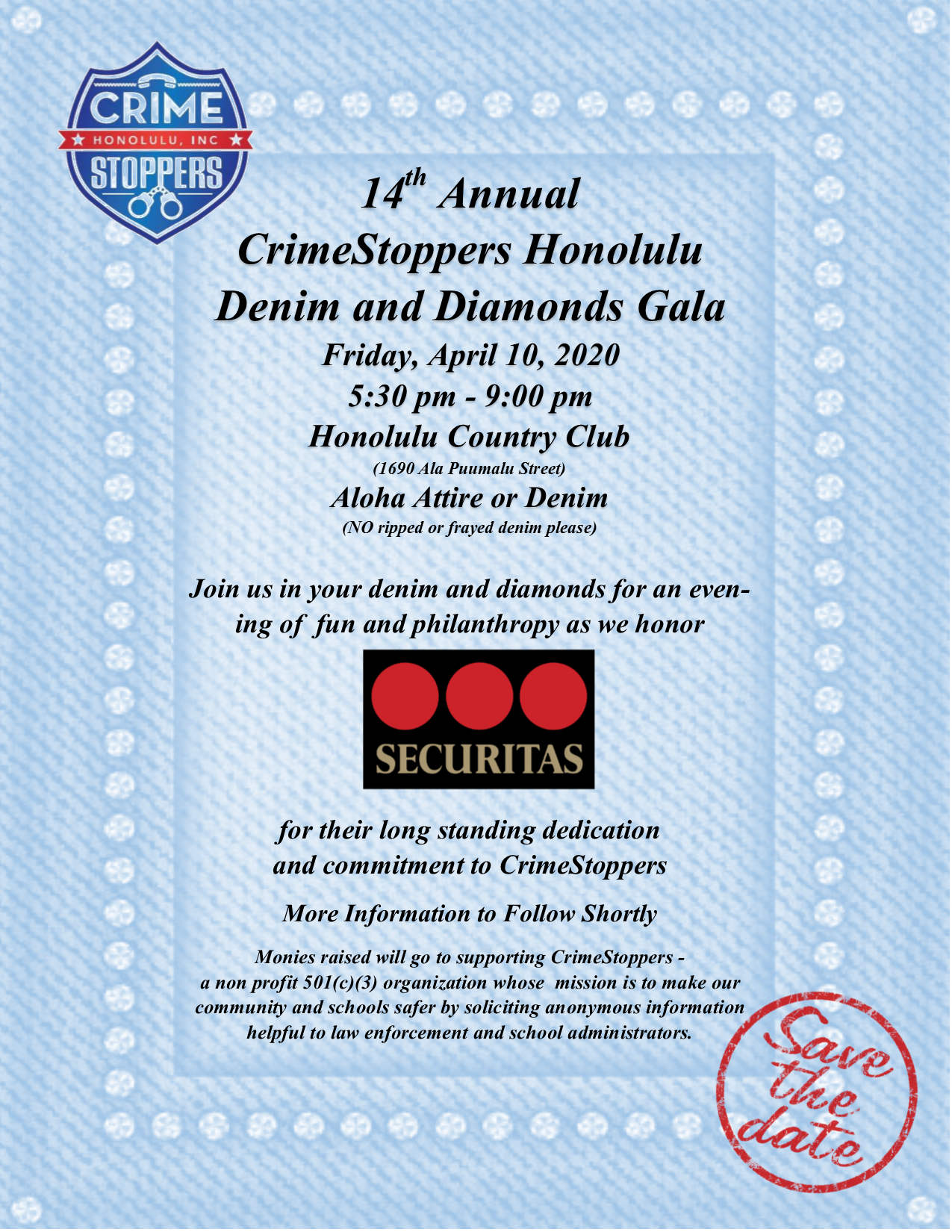 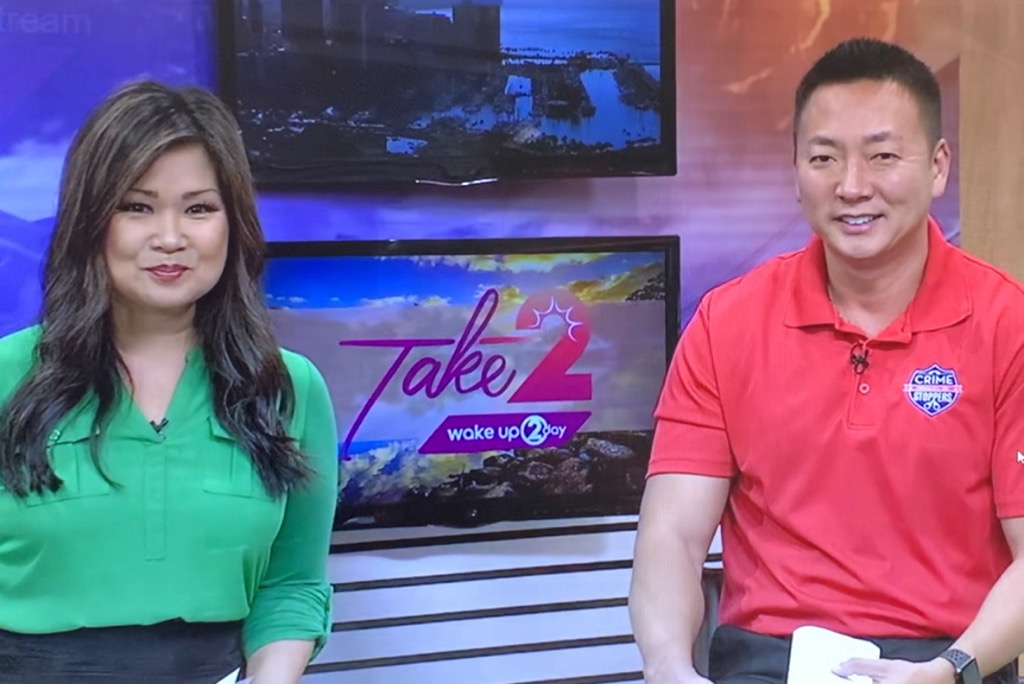 At last night’s award banquet, Sergeant Kim was awarded the 2019 CrimeStoppers USA Coordinator of the Year. CrimeStoppers Honolulu was recognized for all it’s achievement on a national level. 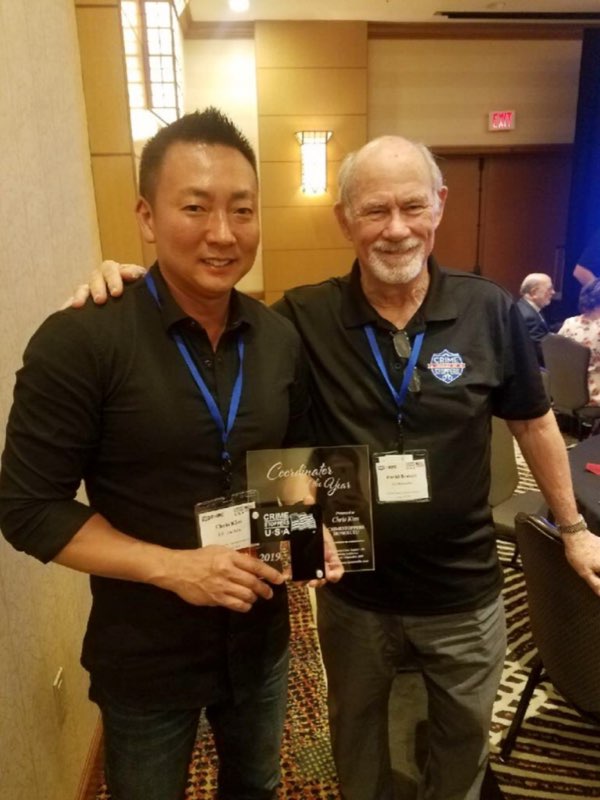 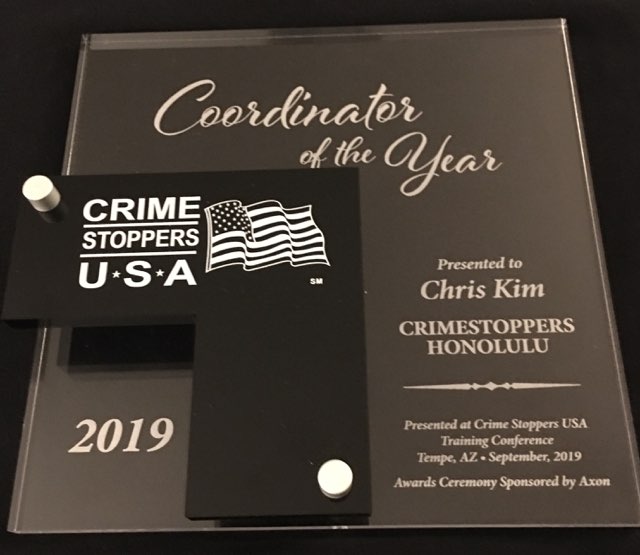 Aloha everyone! It’s that time of year again! Halloween is in 4 days! Let’s enjoy it with these safety tips!

2. Plan your route. Trick or treat in familiar neighborhoods.

3. Enter homes with a trusting adult.

4. Check your costume. They should be fitted to avoid trips and falls.

5. Always test make-up in a small area first. Remove it before going to bed.

6. Always use the crosswalk. Stay on the sidewalks. Vehicles may not see you because of your costume.

7. Do not eat your candy until an adult checks them. Check your candy carefully. Throw away anything that looks rotten or suspicious.

9. Carry your cellphone just in case you get lost in the crowd. 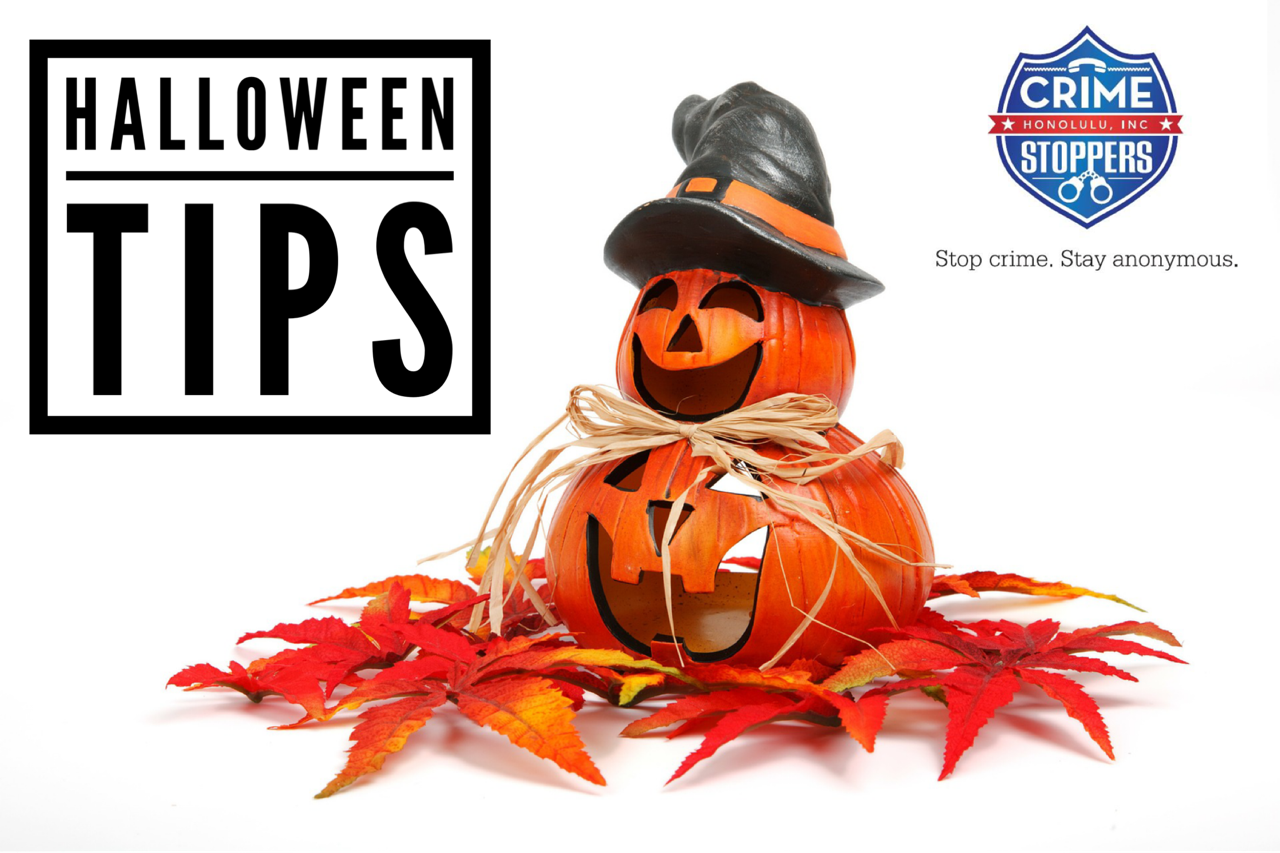 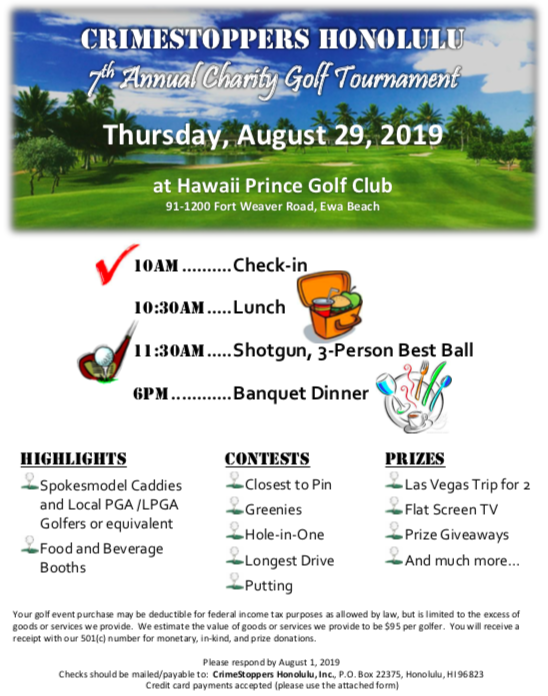 CrimeStoppers share surveillance of recent crimes on an assault, a forgery and a purse snatching
May 08, 2019 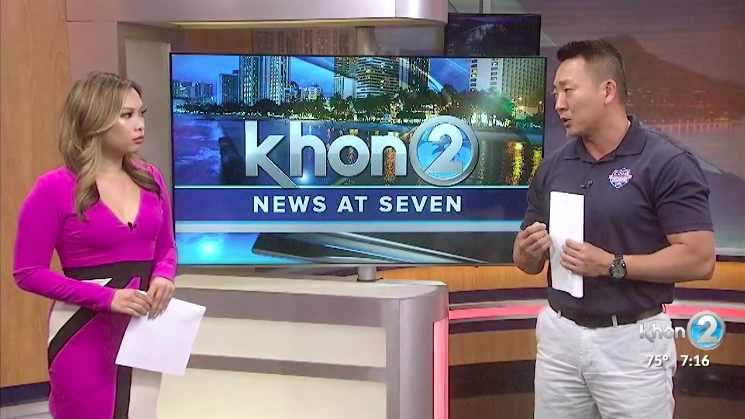 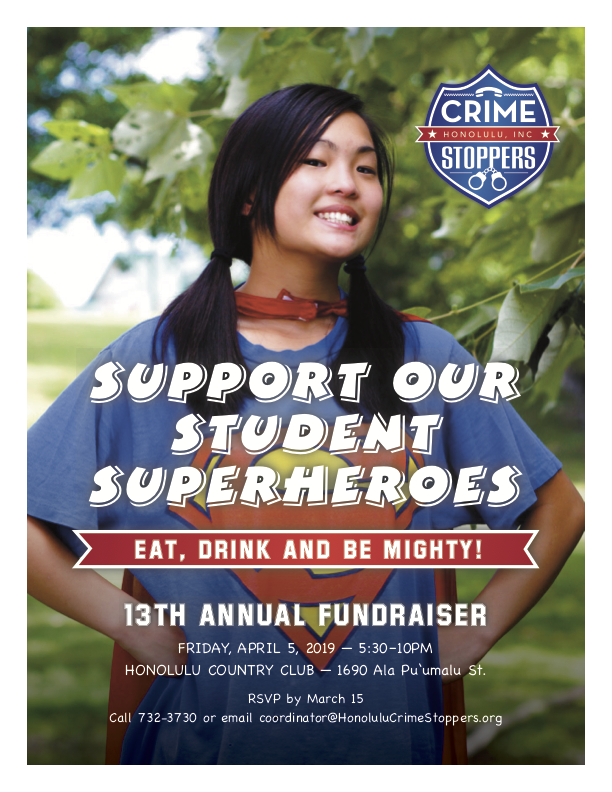 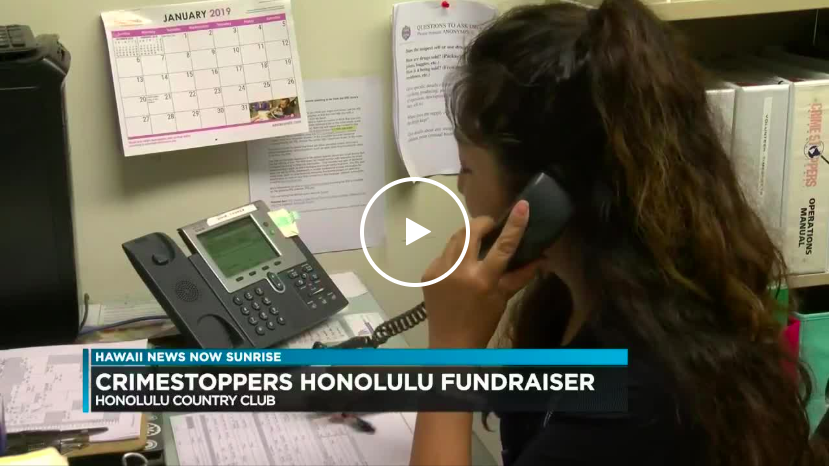 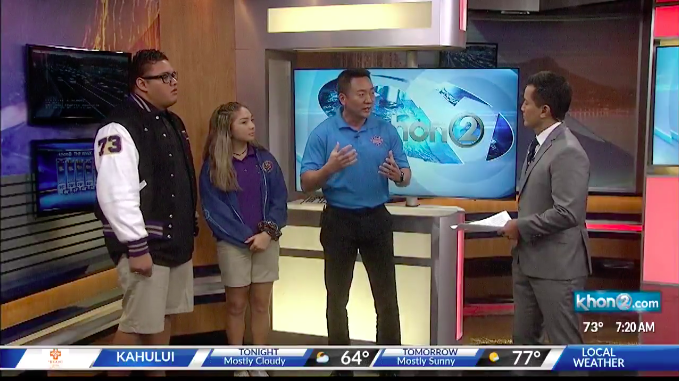 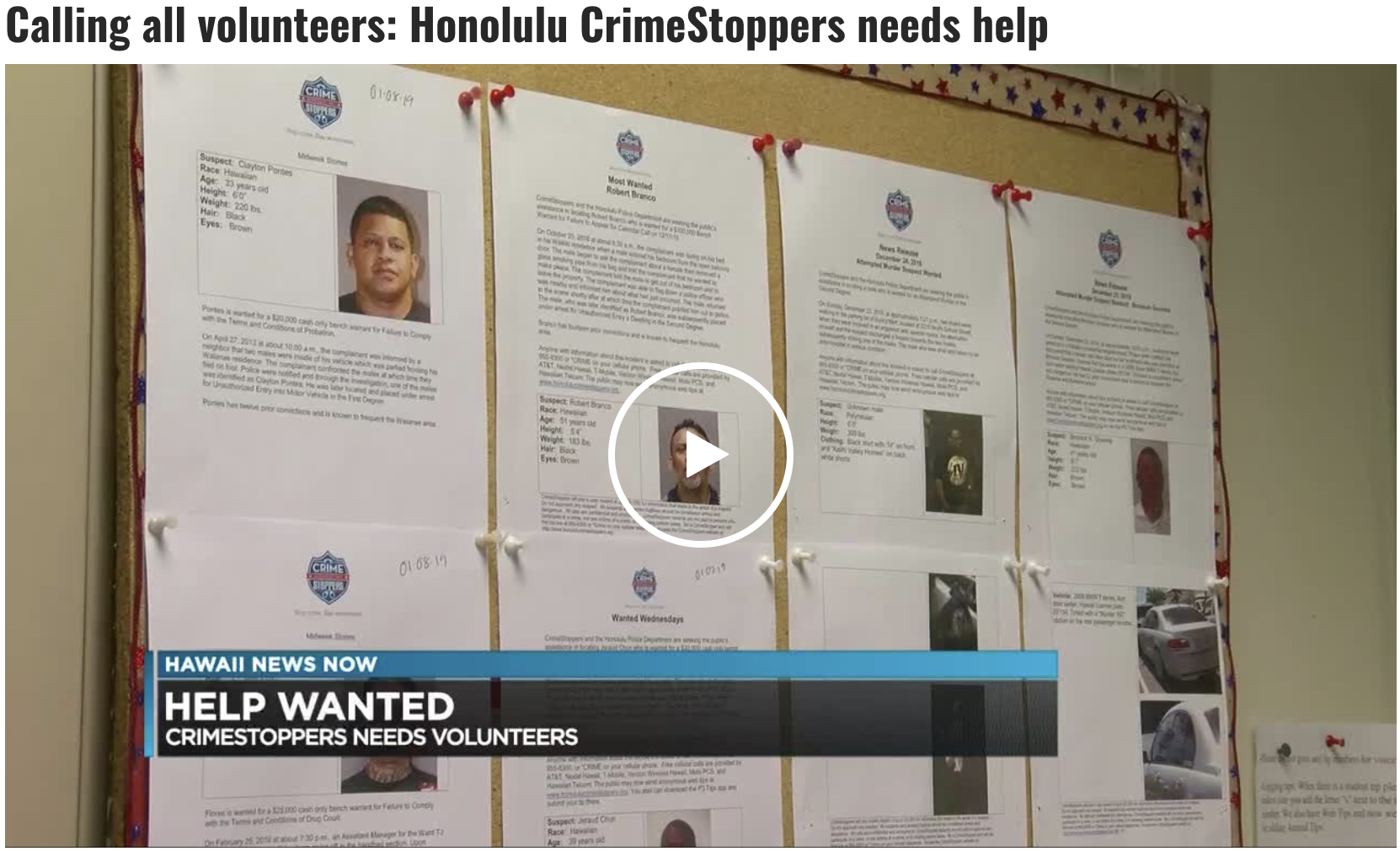 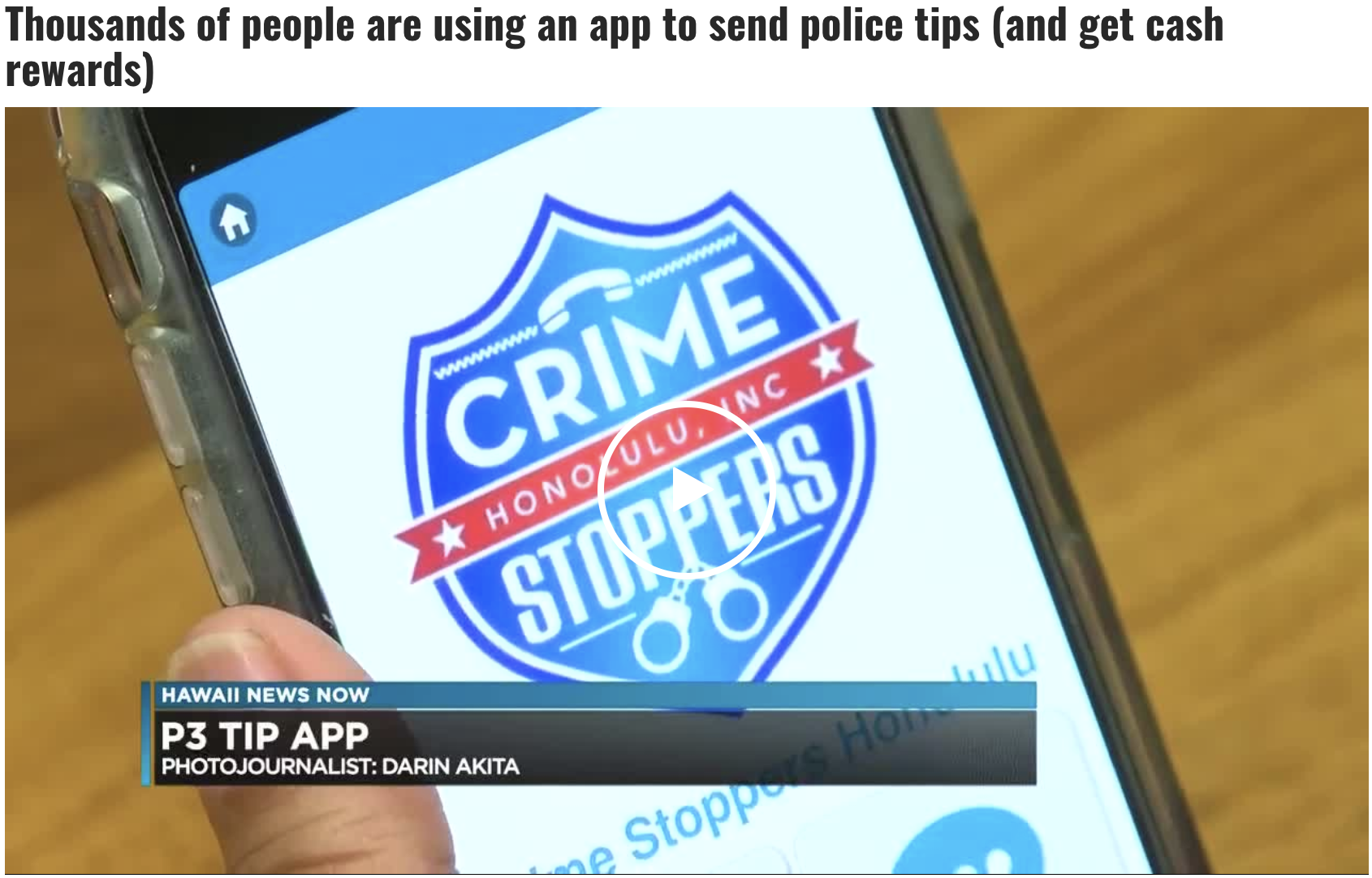 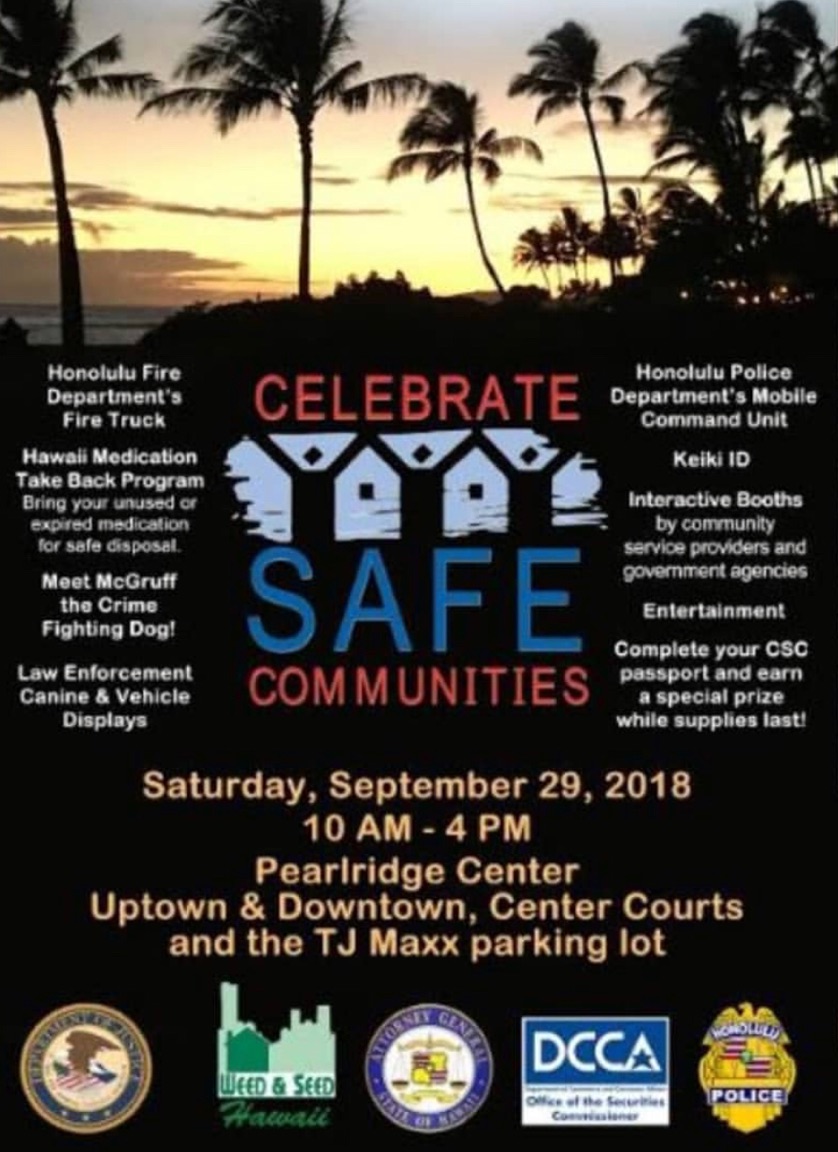 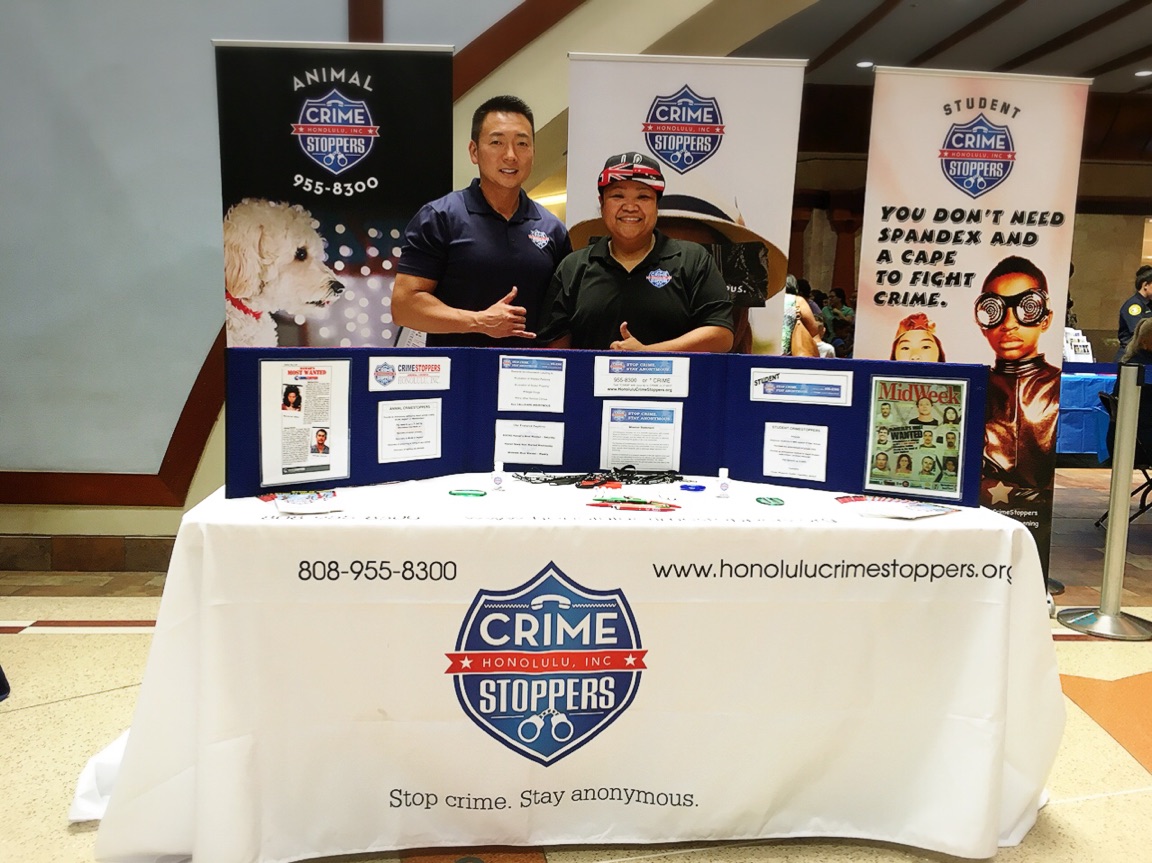 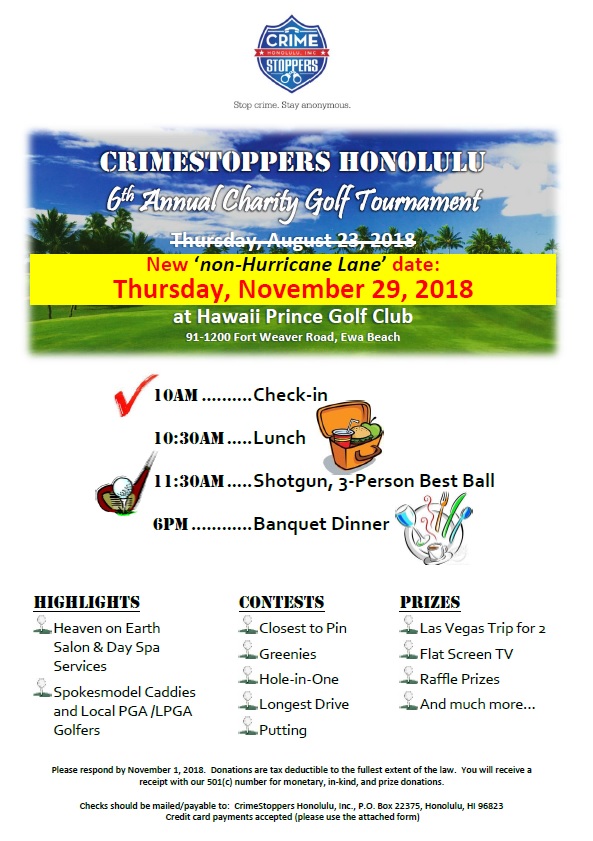 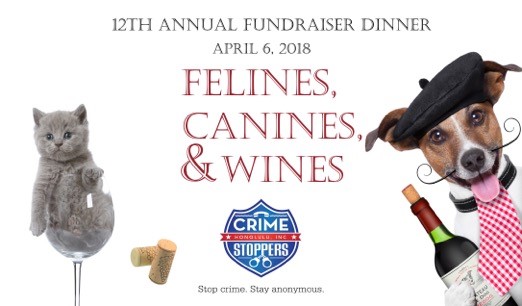 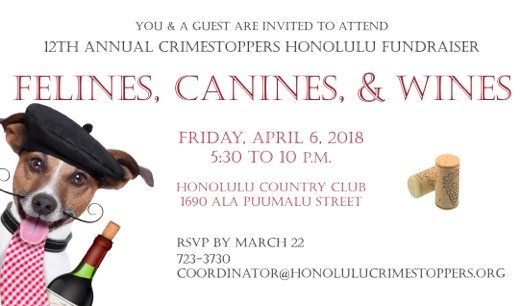 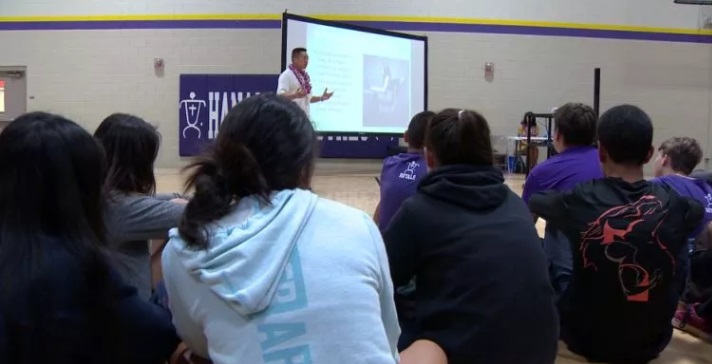 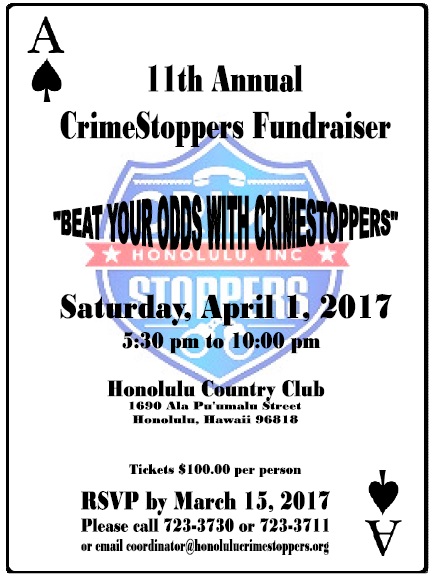 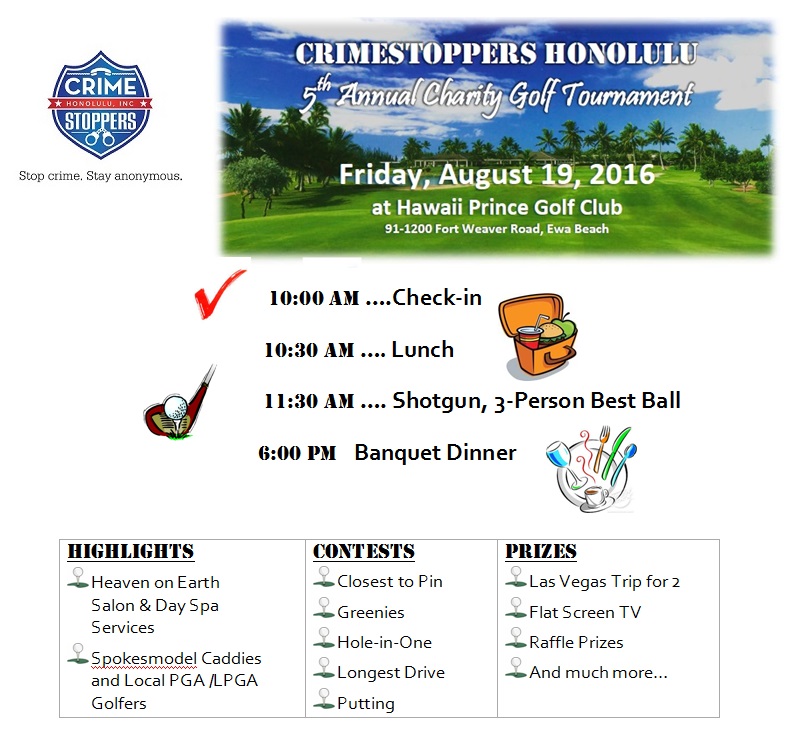 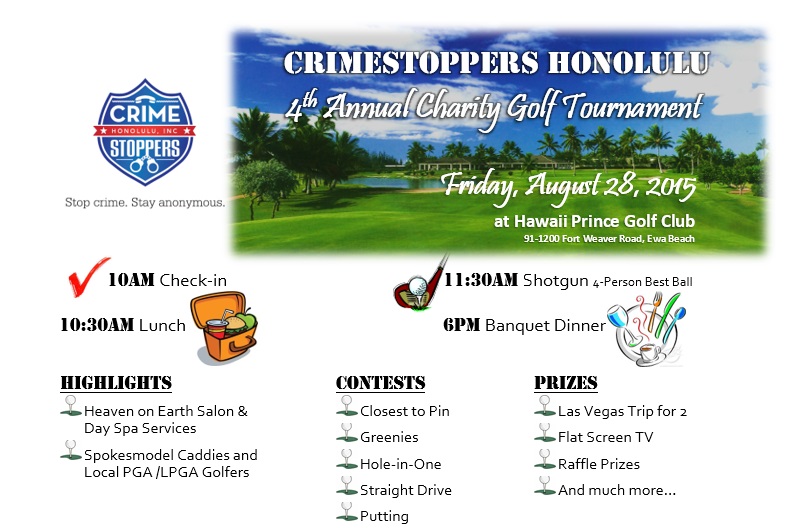 CrimeStoppers held its 8th Mahalo Luncheon at Hale Ikena Restaurant on June 16, 2010. Each year CrimeStoppers hosts a lunch to thank our partners that make the program successful and give awards to deserving receipients.

This year our award for the Most CrimeStoppers Arrest went to the District 3, Crime Reduction Unit, for making the most arrest based on tips received through CrimeStoppers. The unit is headed by Sergeant Douglas Iwamasa.

The Media Television Award went to  Marissa Yamanae  from KHON2  for "Hawaii's Most Wanted, " that airs on the 6'oclock news every Saturday.

The Media Print Award went to Don Chapman from Midweek for " Hawaii's 10 Most Wanted" which is printed every year.

The Media Radio Award went to 98.5 "The Wake-Up Crew," Rory Wilde, Gregg Hammer, and Crystal Akana for our weekly fugitive of the week every Wednesday morning at 7:00 a.m.

The Oustanding Volunteer Award went to the volunteer with the most hours worked  for 2009/2010. The award was given to Mr. Mel Hayashi.

CrimeStoppers Honolulu, among other awardees, was recognized as the Outstanding Organization for 2007.

"No one entity can fight crime alone," said Governor Lingle during this year’s ceremony at the Pacific Beach Hotel in Waikiki.  She also remarked that "It takes partnerships and cooperation to rely on strengths of partners while developing innovative ideas."
CrimeStoppers Honolulu
Anderson Software © 2020 All Rights Reserved